TORONTO, ONTARIO – Feb. 7/13 – Fight To End Cancer (FTEC) is gearing up for its second annual event with sights set on surpassing its inaugural achievement of over $56,000 raised for the Princess Margaret Cancer Foundation. This year’s event will be an explosive evening of celebration and entertainment at the Old Mill this Saturday June 15, 2013. 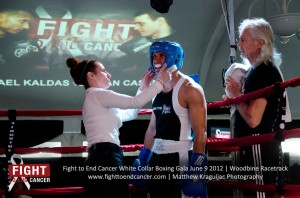 The centerpiece of the evening’s full slate of activities, climaxes in a series of boxing matchups featuring participants drawn from the local community and sponsored by Kingsway Boxing Club.

FTEC is proud to announce a very high profile Main Event featuring John Morrison, General Manager of Xerox Canada vs. Matt Hehn, Marketing Director of Charton Hobbs. What makes this selection so special is that Xerox is a key FTEC sponsor as Official Printing Partner. Not only does this company put it all on the line for the cause, but now John will be literally fighting for what he believes in.

The fight card is filled in support of a great cause and FTEC Executive Director Jennifer Huggins expects the bouts to be even more intense in this year’s edition. “People are training hard,” she observes at Kingsway Boxing Club. “And they are all driven to make a difference for the Princess Margaret Cancer Foundation.”

Among those getting “ready to rumble” when the bell goes is the event’s first female corporate fighter, Shireen Fabing, Marketing Manager with Rogers Communications. Fabing has dedicated her bout to support of cancer survivors. “This is an amazingly fun thing to be a part of,” she says on a training break. “Everyone wants to win!” 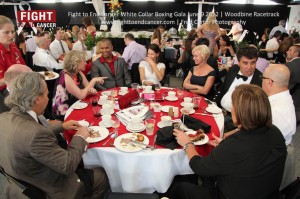 Several bouts will grace the Old Mill and delight the “White Collar” crowd enjoying a gourmet dinner and visits with VIPs. It’s a fight with the law in the leadoff bout as Chris Atkins of Walters Forensic squares off against Robert McGlashan, a lawyer who delights in casting reasonable doubts on Atkins’ evidence. The charges won’t be the only things getting dropped in this one before the verdict is in.

Next up is Shawn Fitzpatrick of Oxygen Bike Co. vs. Rob Gorican from Feast of Fools Theatre. Suffice to say that Shawn is out to make Rob wear that “Fool” moniker while likewise Rob has warned Shawn to go ahead and bring “his little tricycle” to the match on June 15.

Another match sees Jeff Brossmann, owner of Atlas, point of service tech firm, taking on Markham Firefighter Daryn Ackers. Jeff may think he has the bill all added up, but Daryn plans to “burn down” Jeff’s calculus of victory. 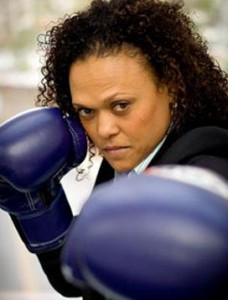 In the Co-Main Event, Shireen Fabing from Rogers Communications meets Ilona Umanets, representing the staffing agency Eagle Professional Resources. Ilona hunts heads in the work world and will be after Shireen’s in the ring. Shireen looks to keep her on hold for a really long time, then deliver a whole new kind of wireless package. The blows will be free, HST not included.

“We exceeded all expectations last year,” Huggins recalls. “Now we want to exceed our imagination. It starts with passion for the vital mission of ending cancer in our lifetime and continues with the fighters and community members who step up. It’s a serious job to beat cancer, but that doesn’t mean we can’t have a great time doing it!”

Tickets to the event are going fast, already selling out of our ringside tables. All donations and ticket purchases are available on our website at www.fighttoendcancer.com