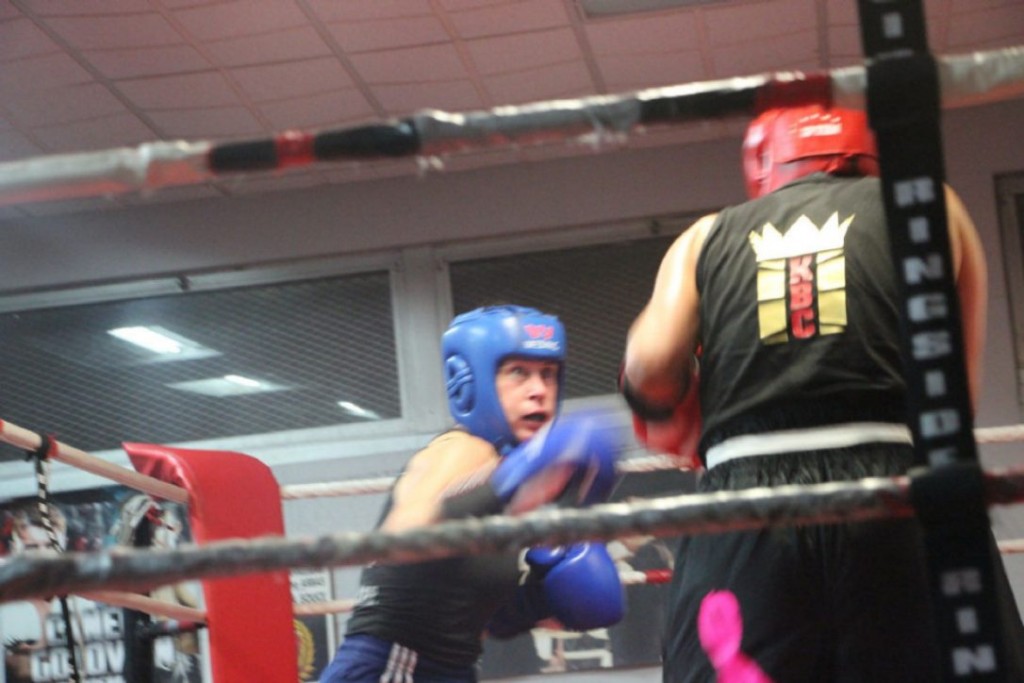 [THE TORONTO STAR] I became an amateur boxer at 53

When Kate Robertson first stepped into Sully Boxing Gym, she just wanted to learn how to throw a punch. Instead she stepped out of the ring looking forward to fighting again.

My opponent jabs at me with her left then hits me with a right. My head snaps back.

“Argh! Keep your chin down, hands up,” I tell myself.

I’ve got to concentrate. This is only round one of a three-round bout. I can’t go down in the first round.

I regroup. Tuck my chin, lift my gloves to protect my head and go in for the counter attack. I’m a south paw, so I try to blind my opponent with two right jabs and then throw a left cross.

I am determined not to embarrass myself. I am 53 years old and competing in my first amateur boxing match this early November evening — that’s attention grabbing enough.

From fitness class to fighter…

“Hey mama, you want to fight?”

It’s about 8:30 p.m. on a Friday night and trainer Winslow Fraser is talking to me. I’ve been showing up at Sully’s Boxing Gym three times a week for more than six months, doing the 7 p.m. boxing fitness class run by former Canadian Heavyweight champ Tony Morrison that attracts the Groupon crowd. Tonight, I was about to get serious.

I took up boxing when I was turning 50 and searching for a new sport. After 40 years running up and down the soccer pitch, I’d exhausted my passion. Boxing held an unexplored allure.

Sully’s was exactly what I thought a boxing club should be. Its original Ossington Ave. location was where Muhammad Ali trained to fight George Chuvalo in 1966. That gym is now the site of condominiums with a heritage plaque marking its provenance. Sully’s latest location opened on the second floor of an aging Dupont St. warehouse about 10 years ago. Photos of boxing greats and unknowns compete for wall space with tattered fight posters and positive slogans.

Fraser is Sully’s main boxing trainer who, with owner Joe Manteiga, goes to the fights. He is a fierce looking dude, a few years shy of 60 and buff beyond most men’s dreams. His style screams dapper street thug. He favours heavy silver chains and thick rings — they adorn his fingers, thumb, ears and nose. You can see the life he’s lived in the scars marking his skin, the crooked finger that can no longer straighten out and those missing teeth.

Fraser is a former professional fighter, whose grandkids call him Papa Slow. It suites him, so I use it too.

I tell Papa Slow that I want to learn to box.

I spend the next 30 minutes punching up at his strike pads and ducking his blows. I give everything and keep pushing after my arms start to burn and that pukey feeling creeps in. Finally he ends the session. He takes a step back, looks me over and with a wry grin says he admires my perseverance and he can work with my lack of skill.

I wake up the next morning with a black eye . . . and a boxing coach.

Papa Slow says this after every hard core training session and sometimes adds, “But it’s going to take some time. You’re no spring chicken.”

There aren’t many fighters who match my credentials — novice, female, over 50. Still, more than a year into my training, I register with Boxing Ontario and learn that I have to be within 10 years and 10 pounds of my opponent to participate in a sanctioned event.

I still hit the gym religiously three nights a week. Warming up with Morrison’s fitness class, then doing skills with Fraser or sparring with an opponent before practising these moves on the heavy bag and ending each session with as many as 500 sit-ups and Russian twists.

Months pass but then a bout is confirmed — with four weeks to prepare. My opponent is Shireen Fabing of the Kingsway Boxing Club. She is 44 years old and 125 pounds. I on the other hand am no longer the 135 pounds I claimed to be when I registered. And losing weight has become a bigger challenge since hitting menopause.

So I spend the month concentrating on food and fitness. I am on the scale morning and night. I add road work — a daily 5 km run, cut my calories, eat more spinach and kale and eggs and tofu than I could imagine and — most amazingly — I stick with this regime. I don’t cheat.

I read up about how professional ultimate fighters and boxers make weight by cutting calories, water loading and taking saunas on the day of the weigh in. Rather than sit in a sauna, I follow the advice of a former varsity rower — cut out salt and drink plenty of water.

I arrive at the Stockyards Boxing Gym inside the George Bell Arena on Ryding Ave. and watch the other fighters trickle in. I spot Fabing, my opponent, and size her up — about my height — five-foot-five-ish — similar weight. She’s wearing a knitted cap and her jacket is zipped up under her chin. Her resting face is tough. Then she breaks out a smile and her entire being lights up.

“Ready to put on a show?” she asks after we introduce ourselves.

A show? What a great way to look at this.

During the prefight medical checkup, I notice a rhythmic thumping in my chest. It started right after the doctor, who was taking my blood pressure at the time, asked if this was my first fight.

“Ah, your blood pressure is a little high,” he says, then adds, “That’s to be expected.”

He looks in my eyes and mouth and has me squat and checks the strength in my arms from various angles. Then he gives me the OK and sends me and my now racing heart on my way.

Papa Slow limps into the Stockyards gym leaning on a heavy wooden walking stick. The hood of his multicoloured velour sweatshirt hides his grey dreads. It’s topped with a fedora. Papa Slow and Morrison are in my corner tonight. Morrison rarely goes to the fights any more. I am honoured he has come out for mine.

I don’t watch the bouts that precede mine. I am too busy trying to focus. I warm up in a deserted hallway, practising my moves and not feeling as ridiculous as I suspected I might.

When I started boxing, I just wanted to learn how to punch. Now I am actually going into the ring to fight — and I am nervous. What if my opponent sends me cowering into the corner?

Papa Slow has seen her in the ring before. This will be her sixth bout. “She’s a good fighter.” he tells me, then adds “You are too, mama.”

He puts his hands on my shoulders and looks me in the eyes. “It’s you and her. Ignore the crowd. Put your focus inside the ring and don’t listen to anyone but me and Tony. We’re gonna be right there with you.”

I hang on his every word. We’ve made that connection — that coach/athlete bond.

I’m left handed. Does my opponent know this? Can I use it to my advantage?

“Keep moving to the right. Stay outside. When you go in, go in — commit. Bam, bam, bam,” Papa Slow has repeated that so many times I am not sure if he says it now or I am just hearing it in my head.

I’m walking through the spectators towards the ring and I have to be told exactly what to do. My brain isn’t registering. All I hear is that thumping in my chest.

“Follow me,” Papa Slow instructs. “Walk up the steps. Step through the ropes into the ring. Face the crowd.”

I look out into the packed gym searching for my two daughters. I find them beaming up at me. A calm transcends me. The thumping in my chest fades away. I am ready to fight.

The referee calls my name in the blue corner and my opponent in the red corner. The crowd cheers. It’s the last I hear of them. I am super focused. The ref’s final instructions include something about no hitting the back of the head and he sends us back to our corners.

In the ring, I lose track of how many times my opponent lands punches on my face. I don’t feel the physical hurt — but I do feel the sting of allowing her to get inside.

When I first started boxing people often asked, “Aren’t you afraid of getting punched in the face?”

Well, yes. But I have always wanted to learn how to throw a punch — to know what it feels like to haul off and plow someone right in the face. I shied away for various reasons, mostly because I was not keen to be on the receiving end.

But trained boxers know it’s about avoiding the punches. You duck and weave and counter strike. Your opponent is the one who gets hit. You slip the punches.

I am just getting my bearings when the bell rings ending round one.

I sit on the blue corner stool and Morrison has me straighten my legs so only the back of my heels touch the floor.

I enter round two with more conviction. I keep my feet moving and try to dodge my opponent’s jabs while concentrating on landing a left cross and adding my right hook. This round feels less frantic. I think I am improving.

We jab and punch and dance around the ring for the full three, one-and-a-half minute rounds. I land a few face punches of my own. It is very satisfying.

When the final bell rings I am exhausted but at the same time can’t believe it is already over.

“Ladies and gentlemen,” the announcer says. “There has to be a winner and in this bout the winner is in the red corner.”

The referee raises my opponent’s arm and she leaps in victory.

I’m not surprised — my opponent was definitely the better, more experienced fighter. What did surprise me was how invigorated I felt and how pleased I was with myself.

My opponent and I embrace in the ring. We agree we’ll do this again.

When I decided I was going to fight, I thought it would be a one-time thing — one fight — my prize fight. Instead I stepped out of the ring looking forward to doing it again — only better.