What It Means To Fight To End Cancer

Chosen as “fight of the night”at last year’s FTEC gala event; Shireen Fabing and Kate Hillier were definitely one of the main highlights of the night. We wanted to give them opportunity to share with our readers their personal recounts of what being a part of FTEC meant to them. Be sure to check out a very raw emotional re-telling of the journey these two strong women embarked upon before and after stepping into the 2013 FTEC ring…

“Hi Katie” there are only two people in the world that begin a conversation with me this way… my dad and Jen. When I got the call in early March I knew what I was signing up for, but I had no idea what I was signing up for. So it began, hours and hours of training. In the months prior where I had worked with Shireen helping her to gear up for the fight, suddenly we were “enemies” and forced to the opposite ends of the club. Sore and bruised doesn’t begin to explain it… and yes, I did tear up like a girl the first time someone hit me for real. But I was a boxer now and I’ll be damned if anyone was any the wiser. 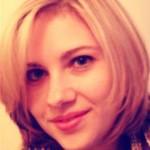 Not since high school had I been a part of a fund raiser or asked for any kind of donation. You can imagine my surprise when I not only met my goal, but surpassed it. People came out of the woodwork; my entire family, friends (old and new). It was actually a complete stranger that was the first to donate. A good word from my loving and supportive boyfriend was all it took.

I can’t tell you much about the fight itself. There were a hell of a lot of punches thrown, I know that with certainty. I remember looking at my coach Mark after the first round wondering, exhausted, how I was going to make it through… but I did!
It’s everything that happened after that mattered most. The first person I saw coming out of the ring was my dad – who’s been fighting skin cancer – running up to meet me in his new Fight To End Cancer hat. Shireen’s mom pulled me aside to congratulate me. “Fight of the night”, that’s what we had earned. I smiled from ear-to-ear for days after. The congratulations and pride that those closest to me and complete strangers were expressing was humbling. The pride that I felt for what I had accomplished was overwhelming. On paper I had lost – but not in my heart.
I’m happy to say that my friendship with Shireen was only cemented by the event. We’re allowed to train side-by-side once again and even spar with each other for fun. We’ve got even more to share now in our new adventures as “mommies.”

Why: I have been wanting to get into the ring since I took my first boxing class about 8 years ago…..so on and off I trained. I heard about FTEC and joined Kingsway Boxing in February 2012 and jumped on board to fight in the second annual event in 2013. Why is for many reasons but first and foremost I believe it’s worthy, noble and a very selfless cause. I’ve lost many people, close family and acquaintances to the disease over the last 3 years, an aunt currently fighting and my “second mom”, a breast cancer survivor – so the “why” was an easy one. 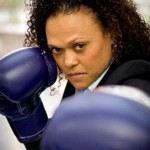 On my opponent Kate: Gym friends before. We sparred together now and again and before she jumped on board she was actually sparring with me to help me for the fight. Once she opted in we were not allowed to breathe the same air, when in the gym (the coaches made sure of it) and now months after one of the coolest nights; we’re friends…not just gym friends but we hang out etc. I couldn’t have asked for a better opponent. Professional, worked and trained hard coming in and we both kept it all in the ring. Our common goal (other than to win) was to BOX…not brawl, not catfight….BOX. If anything, we both wanted to show our supporters that we had technique and could do the sport justice and make our coaches proud. Check, check and check. The standing ovation and “fight of the night” win says it all.

Before: Training was the best part for me. I put in about 10 hours of training per week – in and outside the gym combined. I had never been so mentally strong or physically fit in my life. I loved the feeling after every good and not so good training/sparring session. During: Still no words to describe the adrenalin. Nerves, excitement, 500+ people watching including family, friends and colleagues….plus knowing you’re about to get punched in the face…there is no other rush. After: My hand raised at the end….amazing. Knowing I was part of an event that raised over $100K in its second year….I was proud and grateful to be a part of it. I also went through a VERY long withdrawal period.