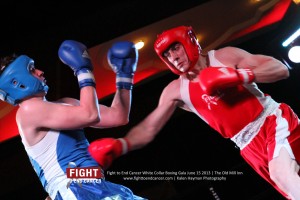 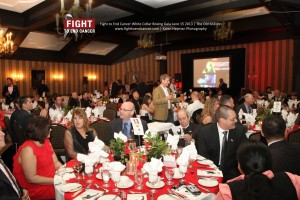 There were only winners at Saturday Night’s “White Collar” Boxing Gala in the ballrooms of The Old Mill Inn. The second annual edition of the Fight To End Cancer (FTEC) set a new level of success in its support of those battling cancer and the ongoing fight to defeat this disease in our lifetime.

From the moment guests arrived at the sold out venue, elegance exuded from every moment of the Black Tie Affair. Guests were personally greeted by Las Vegas showgirl, served sumptuous hors d’oeuvres and delectable cocktails. As you were led through the corridor past unique silent auction items, your heart began to race, the all female Taiko Team executed sets of high intensity traditional Japanese drumming for each arrival. There was no shortage of guests ready to be photographed on the Official Red Carpet with the FTEC Championship Belt and 2013 Fight Team.

Once escorted inside the Brulé Ballroom to luxuriously decorated tables, you were entertained by performances highlighted in the full sized boxing ring which doubled as one of the most unique stages. Throughout the ongoing entertainment that punctuated the evening, guests united in anticipation of the night’s main showcase: five bouts of white collar boxing matches that did not disappoint. The amusement promoted guests of all ages to their feet amidst the electricity in the air that only boxing can provide. The fighters left it all in the ring for the cause as they were encouraged by the 500-plus audience to the very limits of their endurance, heart and will power. In the end it was the wider community that emerged the victor as over $100,000.00 was raised for the vital work supporting cancer survivors while seeking a cure to cancer. The Fight Team singlehandedly raised over $17, 000.00 in direct support of The Princess Margaret Cancer Foundation.

A very special addition to this years fundraising efforts, was that of the What Are You Fighting For Initiative (WAYFF). FTEC Founder/Executive Director and Owner of the Kingsway Boxing Club Jennifer Huggins, maintains the importance of supporting a community that has always supported her visions. When booking her Main Event Matt Hehn, she was introduced to his best friend and founder of the iBellieve Foundation – Simon Ibell. After hearing just a portion of his story and seeing his daily battles, she was inspired to involve him in this years fundraising efforts. Hehn dedicated his fight to creating awareness for the iBellieve Foundation, which is committed to finding a cure to the rare disease MPSII also known as Hunter Syndrome. He also separately raised close to $6000.00 for his best friend and hero Simon, who struggles with MPSII every day.

Huggins credited the goodwill and passion of the FTEC guests, with raising the bar and more than doubling the funds raised in the event’s second year. “We are truly blessed to be able to provide the support we do thanks to our guests, sponsors, and participants. We’re all in this together and we are excited about doing our part to make something extraordinary happen.”

Talk has already turned to FTEC 2014 as the annual event continues to draw growing interest. Business owners and CEOs are already contacting Huggins to fight in next years event. Support is coming in from across Canada and beyond. Ms. Huggins welcomes all allies and maintains that FTEC will persist to do its part in the victory over cancer.