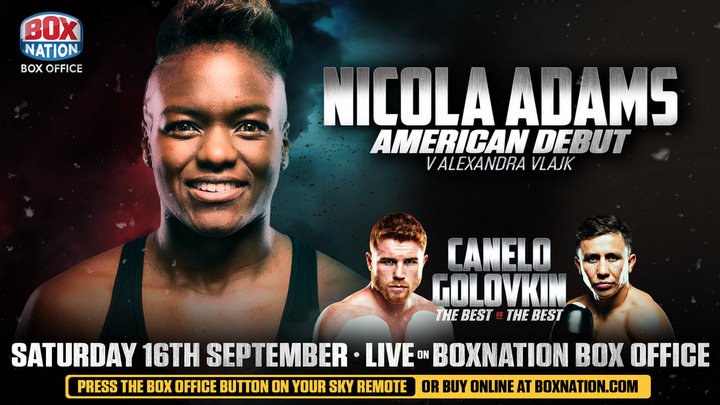 Nicola Adams, the double Olympic boxing champion for Great Britain in London and Rio, is to make her US debut in Las Vegas this September, facing Hungary’s Alexandra Vlajk on the blockbuster Saul ‘Canelo’ Alvarez versus Gennady Golovkin card at the T-Mobile Arena.

“Every boxer dreams of fighting in Las Vegas one day and to be doing this as part of the biggest boxing match of the year is going to be incredible,” said Adams. “It’s great to be fighting three-minute rounds again as this made a big difference in Leeds and I’m hoping for a similar outcome this time.

“My training has been going really well with Virgil Hunter and the team at SNAC. I can’t wait to get in the ring on 16th.”

Frank Warren, Adams’ promoter, said: “This is without doubt THE boxing event of 2017, and I am delighted that Nicola has the chance to showcase her skills on such a huge bill. Canelo v Golovkin is among the very best fights to be made in the last decade and for Nicola to be part of it is brilliant for her and women’s boxing.

“I have every confidence that Nicola will become a world champion in the professional ranks.”

Yorkshire hero Adams made an impressive start to her professional career at the Manchester Arena in April, cruising to a comfortable points win over tough Argentinian Virginia Noemi Carcamo. She controlled the range and pace of the fight with her impressive footwork, punch variety and timing.

In her next contest Adams forced an explosive stoppage against game Mexican Maryan Salazar at the First Direct Arena in her home city of Leeds. The 34 year-old pinned her opponent in the corner and the referee stepped in to confirm her second professional victory in the flyweight contest.

Adams has already set her sights on winning a world title since joining the professional ranks with promoter Frank Warren at the start of the year. A win against Vlajk on September 16 will take her a step closer to becoming Britain’s first ever globally-recognised female professional world champion.

Vlajk, 37, has won 11 of her 17 contests, stopping two opponents, since turning professional in 2013. The Debrecen resident has banked over 114 rounds, compared to Adams’ seven.