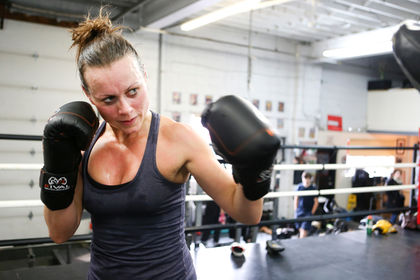 TORONTO – Erica McMaster makes a living as a voice actor.

But on May 30, the Ottawa native will let her fists do the talking.

McMaster is just your regular, mild-mannered, 30-something actor/writer/holistic nutritionist who enjoys climbing into the ring and throwing leather. All in a good cause.

The Toronto resident, the daughter of Canadian diplomats who grew up for a time in the southern African nation of Zimbabwe, will face Paige Cunningham, a special events coordinator at the Princess Margaret Cancer Foundation, as part of the Fourth Annual Fight To End Cancer Fundraiser at the Old Mill Inn in Etobicoke. The unique event — the brainchild of Kingsway Boxing Club owner Jennifer Huggins — matches people from all walks of life — business leaders, lawyers, emergency workers, CEOs — in three rounds of competitive amateur boxing.

For McMaster, climbing in the ring and training as a fighter has been a revelation. She grew up participating in sports at a pretty high level, including swimming, rugby and distance running, but boxing was something the personable voice actor had never considered, that is until her boyfriend, fellow actor Craig Lauzon (a veteran of the Royal Canadian Air Farce), told her about Huggins and her annual fund-raiser.

Lauzon originally was going to take part in the event, but had to bow out because he’ll performing in a pair of plays at the Soulpepper Theatre in Toronto (Trudeau and the FLQ and Trudeau and Levesque) at the same time as the gala. But McMaster became intrigued with the idea of boxing and fell in love with the training and the concept of raising funds to fight cancer.

“If you had asked me a year ago if I ever saw myself doing something like this, absolutely not. I’ve never really enjoyed the idea of two people fighting,” McMaster said over coffee at a downtown Toronto cafe. “The idea of hitting someone was a really hard thing for me to wrap my head around.”

But the chance to raise funds for cancer research is something very dear to McMaster’s heart. Before her 12th birthday, when the family was living in Zimbabwe, she lost her mother Jill to cancer.

“It goes without saying that her absence has had an enormous impact on my life,” McMaster said. “I miss her everyday.”

The 36-year-old also lost two of her grandparents to the disease and, just last year, a childhood friend, who died at 34.

Her goal now: “To punch cancer in the face.”

At an age when most little girls are preoccupied with playing and friends and having fun at school, after her mom died, McMaster became occupied with health and diet (becoming a vegan in her teenage years) and searching for ways to avoid getting cancer.

“At a really young age, I started becoming really aware of what I was eating and how much I was exercising, because in my mind I thought I don’t want to ever get cancer. It was a huge fear. And that kind of escalated to full blown eating disorder,” she said.

In fact, her eating disorder became so serious, a few months after her mom passed, the family moved back to Canada and McMaster had to be hospitalized for a month and a half. She struggled with eating disorders throughout most of her teens and fought to come to terms with losing her mom and the disease that killed her — certainly something most teenage girls don’t generally worry about.

“The fear is definitely there,” McMaster said. “But I don’t live my life as rigidly as I used to. More than anything it’s gone the other way, I just want to live my live as much as I can because of what I experienced.”

Staying fit has remained a priority for the on-air voice of Slice TV and boxing takes that to another level.

“It’s hardest training I’ve ever done,” McMaster said. “I think the thing that is the most surprising to me is just how hard it is to go for five minutes at full force.

“It’s such hard work. I think ‘Oh, it’s only going to be three two-minute rounds,’ but that is going to be probably six of the most gruelling minutes of my life,” she added.

It’s tradition for fighters to adopt a nickname and McMaster has long had one — The Luscious Beast — a salute to the years she spent in Africa. She actually has a tattoo of a mother and baby rhino on her left shoulder blade.

Despite losing her mom at such an impressionable age, McMaster looks back at her time in Zimbabwe as the “happiest time of her life.” And what would also make her happy is if she and Cunningham put on a good show and the Fight to End Cancer Gala is a big success, which it no doubt will be. McMaster has a small army of family and friends coming to the Gala to watch her fight Cunningham.

“It’s still crazy,” she said with a laugh. “I can’t believe sometimes that I signed up for it, that I’m this far in. But it’s awesome and I have a huge appreciation for the sport now.”