Catching up with 2013 FTEC Fighter – Shireen “The Machine” Fabing

On a sunny June afternoon, boxers from different parts of Ontario made their way to Toronto’s west end as a scheduled club show was about to kick off. The card had various types of boxers ready to impress, but there was one bout that stood out. Kingsway Boxing’s own Shireen “The Machine” Fabing was stepping into the squared ring again to take on a strong opponent!

Shireen displayed her skill and power, holding her own throughout the fight. The packed crowd cheered loudly as both boxers gave it their all in the ring. With Virgil Barrow (FTEC Head Coach) once again in her corner, Shireen pushed her opponent to her limits. After what was hailed as ‘Fight Of The Night’, Shireen narrowly lost the bout on a split 2-1 decision, but had her head held high after giving it all she had!

We caught up with the FTEC’s Alumni to see what she’s been up to lately and how her life was changed after fighting at the second edition of the Fight to End Cancer!

Q. How did you find training in boxing/ at Kingsway Boxing different from other type of training you did in the past?

A. When I joined KBC (I think it’s 5 years) it was around the time I decided I wanted to do more technical vs conditioning classes so I think that in itself was different as my fitness objectives shifted.  That said, I came with some bad habits that no-one previously corrected and I remember appreciating the patience everyone had whether in class or whether I was there working out on my own asking questions. One thing I remember from the first time I walked into the gym was getting a very good feeling or vibe if you will.  Everyone was (and still is) welcoming, warm and very genuine.  It’s my second family.

Q. How has your life changed after being part of the Fight to End Cancer event?

A. Aah, where to start…. everyone says it changes you and it certainly does and all in positive ways.  My lifestyle has changed, dealing with life in general in that I’m always positive and grateful for being here another day including the not so good days.  I constantly remind myself that there are problems bigger than mine.  I know now that there are good people in this world who do good for no personal gain other than to help and contribute to a worthy cause like FTEC.  For me, I believe being part of FTEC 2013 prepared me for what was to come 2 years later.

In 2013 I fought in memory of family members lost and also to my surviving “second mom” and they all were very near and dear to me.  In 2015 I lost a very significant person in my life to this vicious disease and she was gone within about 3 weeks from being diagnosed and it had a profound effect on me.  I believe that if I did not join KBC, did not participate in FTEC 2013 and did not get to know a new group of fighters and supporters each year, dealing with her death would have been very different.  Getting to know a new group of fighters and FTEC supporters each year and them sharing their stories has shown me and taught me that courage and bravery can come in many forms.  I’ve learnt that it is ok to share from the heart, it is ok to show that you are sad, angry and not just share the happy moments.  I’m not saying I share all the time but I’m a work in progress and that’s a big change for me personally.

Q. How many fights have you had since FTEC? What gave you that motivation to continue to keep boxing competitively?

A. I’ve had 2 bouts since FTEC.  I fell in love with boxing – I think that sums it up.  Everything else stems from that –  challenging myself, pushing myself and my body and seeing/feeling myself improve daily.  Having awesome people in my corner (pun intended) in and outside of the ring and a connection with my awesome coach leading up to fights is key. Then there’s this – when my four year old says things like “mummy, I want to be like you when I grow up” or “mummy, you the champ” – who can’t be motivated after that right?

Q. What was running through your head, going in your second and third amateur bouts?

A. I’ve usually dealt with the nerves by the time fight week rolls around.  I love my mental state the last few days.  Calmand collected but ready.  Nothing really phases me that week – I think it’s more my determination not to let anyone or anything mess with my mental state these last few days.  Excited to be able to finally showcase the hard work that went into preparing for the day – feels like my reward.

Q. Have you thought about possibly taking on a bigger role in the boxing scene, like becoming a coach or even an official? Why?

A. I’ve thought about it a lot this year but never verbalized or took any action yet, probably because I’m still so focused on training and getting more bouts but in short, yes indeed!  To be able to contribute to something I love so much and to be able put as much into others as my coaches have put into me would be a reward you can’t put a price tag on.  In my corporate life I have coached and mentored and it’s something I truly enjoy doing and it would be pretty awesome to do the same in my boxing life one day.

Q. Last time we saw you was at this year’s edition FTEC event, when you see the current FTEC boxers, in what ways to do you help them prepare?

A. As an FTEC alumni member I make sure I’m available to the fighters and I’ve had the pleasure of helping them celebrate their good days motivating them through some of their not so good days.  I’ve shared nutrition tips, training tips, tips on planning your life around FTEC and right up to fight night, getting some girls ready with battle braids (yes that’s happened).  Sparring is a given.  I’ll follow direction from the head coach during sparring sessions as each fighter has different needs, strengths and areas of opportunity and we’ll work together on that.

Q. What does it feel like to be on the other side of the ropes and watching the FTEC boxers box, instead of boxing yourself?

A. I have been fortunate that most times I’m not on the other side of the ropes with of course the exception of fight 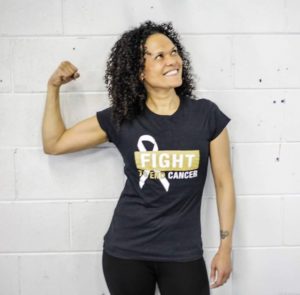 night but yeah, so many feelings indeed…but most of all just happy and excited for them.  Having been through the journey myself I know the magnitude of the experience.  It starts off a little surreal at the get go and you can’t quite process what’s to come but as the journey unfolds you realize that it’s so much bigger than you and you get to be a
part of it. There are moments of accomplishment, both individual and from a team perspective and then there are those moments when you realize the seriousness of what it is you are part of and how cruel and volatile this disease is.  I do love watching and experiencing their improvements and cheering them on.  Lastly, I feel it is my duty to tease and call them out sometimes when they feel like taking a day off – just to keep the balance 🙂

Q. What advice would you give to someone thinking about trying out for FTEC?

A. This will be one of the best things you’ll experience if you put in the work.  Whatever your motivation – bucket list, fitness goal, a loved one lost or survivor etc – you’ll reap the rewards in more ways you deemed possible.  You also get to be part of a growing family which includes so many amazing individuals from all walks of life. 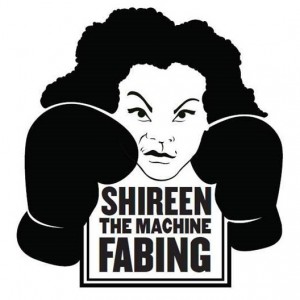