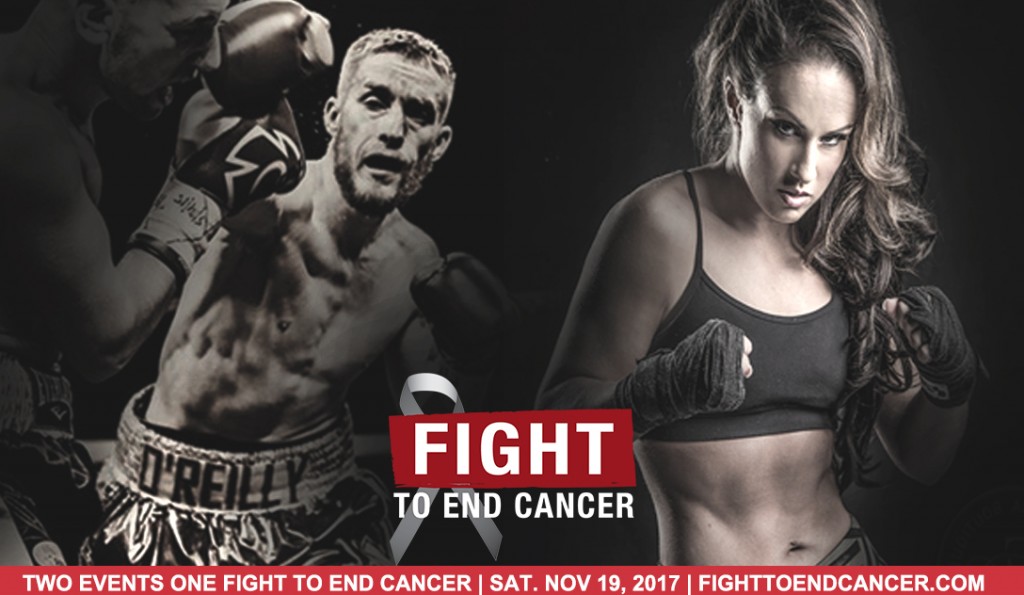 DEFEAT IS NOT AN OPTION.

That is the motto of every person who dedicates their time and energy to the difficult battle we face against cancer every day. Every single person is affected by cancer in some way, and each person has their own way of fighting it. Sometimes they’re fighting in the most literal sense of the word, like Fight To End Cancer’s very own Josh O’Reilly. He took to the ring at the 2012 Fight to End Cancer gala and is now fighting cancer at a professional level, training hard, and boxing with one important cause at heart.

You don’t need to be a professional boxer to join the fight. Mariela Burkett, a cancer survivor and champion of fitness, has taken a different approach to her fight, by raising money through annual and semi-annual Survival Bootcamps, and her Buck-A-Burpee campaign. Every single person has a different story to tell about how their lives have been affected by this terrible disease, but everybody has one thing in common, the instinct to fight it.

The Fight To End Cancer means something different and every individual’s fight is important and valuable. People like Josh O’Reilly and Mariella Burkett are teaching us that there are infinite ways to fight cancer, and with everything that they do they show us that Defeat Is Truly NOT An Option.

Who: Josh O’Reilly is a local fighter hailing from Hamilton, Ontario. He fought in the 2012 Fight to End Cancer in honour of his late grandfather. He was also fighting in honour of his boxing coach, Bob Wilcox, who tragically lost his 7-year-old son, Robbie, to brain cancer. Josh O’Reilly continued to Fight To End Cancer long after his match in 2012 ended, and now, nearly five years later, he is fighting at a professional level. Although this will be O’Reilly’s seventh professional fight, he has been fighting at an amateur level for over a decade, and has an impressive 101 amateur fights under his belt.

Why: O’Reilly will be donating a percentage of his earnings to benefit this important cause. Come out and see a great match, and help fight to end cancer in our lifetime!

Where: The fight will be held at the Hershey Centre in Mississauga, Ontario

Who: Mariela Burkett is not only a cancer survivor, she is a cancer fighter. Mariela has been cancer-free for 2½ years, and spends most of her time combatting the mental and physical struggles that individuals and their families endure following a cancer diagnosis. Mariela is taking a unique approach to fighting cancer by hosting Survivor Bootcamps annually and semi-annually to raise money for her cause. She is a certified coach, personal trainer, and fitness instructor. Mariela has also begun an exciting campaign called the Buck-A-Burpee Campaign, which will run from now until the end of May. For every dollar donated to her campaign she will do one burpee. Her hope is to complete 10k burpees by May. She will be posting all of her burpees onto her Instagram: @fitmariela so be sure to check out all of the hard work she’s been doing for this campaign so far!

Why: The goal of the bootcamp is to help raise funds for cancer patients and their families while bringing awareness to the battles they face every day. Participants in this workshop will be given the opportunity to test their physical strength and mental focus, all while benefiting an amazing cause. 100% of proceeds will go to the Princess Margaret Cancer Foundation!

Where: The workshop will be held at Northstar Montessori School in Mississauga, Ontario

For more information on both of these events you can contact Jennifer Huggins at jennifer@fighttoendcancer.com or 416-666-9314