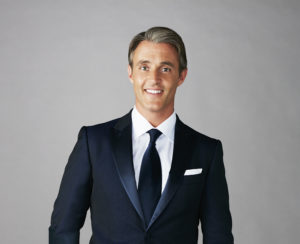 The Fight To End Cancer is absolutely thrilled to announce that Ben Mulroney (Anchor, CTV’s ETALK) will host the 5th Annual Fight To End Cancer Gala, in support of the Princess Margaret Cancer Foundation, as our Official FTEC2016 Master of Ceremonies!

Ben will be donating his time, for the entire duration of the evening, and will surely help make our event an unforgettable experience. A huge thank you to Ben and his team at Bell Media for taking part in the Fight To End Cancer.

We are looking forward to seeing Ben in our ring on Saturday June 4th, at Toronto’s historic Old Mill Inn!

We asked Ben a few questions about what being a part of an event like ours, means to him personally.  You can read his brief interview and full biography, below.

What Company do you work for?
Bell Media

What is your job title and description?
Anchor of CTV’s ETALK – the #1 most-watched entertainment newsmagazine in Canada.

The Fight To End Cancer gala raises funds for the Princess Margaret Cancer Foundation. Have you ever worked at any other fundraiser that supports them?
Yes, last May I had the honor of hosting the ‘Tailoring Care’ event for Princess Margaret, in support of men’s health. I’ve also hosted other events, in Toronto and LA, for the Rally for Kids With Cancer.

Has cancer ever affected you, or anyone in your life?
I have been fortunate enough that none of my closest friends, or family have battled cancer, but it is a near certainty that they will one day.

In figurative terms, what does being a part of the Fight To End Cancer, mean to you?
There are so many forms of cancer, so to be a part of this fight is to be part of the most noble war of our lifetime. To imagine a world without cancer, is to picture a future where millions of lives are spared, where pain is lessened, where time, energy and money are devoted to other things, other goals, other passions. This is, by definition, a better world and one we all deserve.

Ben Mulroney considers himself a pretty lucky guy. “I love movies, television and music, so as Anchor of Canada’s #1 entertainment show, ETALK, I can say this is my dream job.”

A veteran of entertainment reporting for more than a decade, Montreal-born Mulroney is an expert in his industry and is regarded by many Hollywood stars (north and south of the border) as a friendly face, a respected journalist and a pro at his job. Mulroney got his start as the Quebec City Correspondent for talktv’s The Chatroom in 2000, before becoming co-host on the interactive show in July 2001. He then moved to a new role of entertainment reporter for CTV’s CANADA AM in October 2001. Mulroney was also the host of CANADIAN IDOL for six seasons.

Now in his 14th year with ETALK, Mulroney delivers entertainment news daily from the ETALK studio in Toronto, and travels the world to interview the biggest stars – reporting from the biggest red carpet events, including the OSCARS®, GOLDEN GLOBES® and JUNO Awards.

Mulroney added radio airwaves to his repertoire in 2009, as host and co-creator of ETALK 20, a weekly two-hour radio show that aired on 11 Bell Media Radio stations across Canada. In February 2010, Mulroney reported on entertainment news from the Vancouver 2010 Olympic Winter Games for CTV. In April 2012, Mulroney joined LIVE! WITH KELLY host Kelly Ripa as co-host on the popular daytime talk show, in one-of-four shows that aired live from Banff, AB. Less than a month later, Mulroney was invited back to share the LIVE! stage with Ripa, co-hosting for the second time from her set in New York City. Impressed with his co-hosting duties, ABC News announced in June 2012 that Mulroney would add the role of contributor to his resume for the Weekend Edition of their popular EMMY® Award-winning morning news program, GOOD MORNING AMERICA (GMA).

Mulroney found his calling in show business, not politics, despite being the son of former Canadian Prime Minister Brian Mulroney and having a law degree from Laval University and a history degree from Duke University.

In 2012, Mulroney was the national spokesperson for WaterCan, a charity focused on bringing drinking water to those most in need. In this capacity, he helped raise funds and awareness by climbing the highest peak in Africa, Mt. Kilimanjaro. Most recently, Mulroney became Cystic Fibrosis Canada’s new National Ambassador, leading the organization’s Great Strides™ Walk in Toronto – a fundraising event in support of CF research and care programs. Mulroney is also on the board of The Shoebox Project for Shelters, a national charitable organization, whose mission is to collect and distribute gifts packaged in shoeboxes to women in shelters across Canada and to help raise awareness about homelessness.

A WORD FROM THE SPONSORS OF THE FIGHT TO END CANCER